As some of you know, I’m in crazy writing mode. I have a deadline coming up, and my life right now is writing and more writing with breaks for the gym and food. By sunset, which comes early now, I can barely form comprehensible sentences, and it’s time for dinner, a TV show, and bed.

BUT—this past weekend, I took a break for my little sister’s wedding. Our newly married daughter and her wife flew in for the weekend, and we went to a wine festival on Saturday, 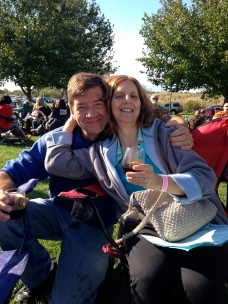 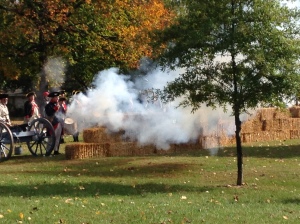 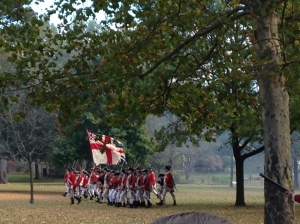 The charge by the British troops! 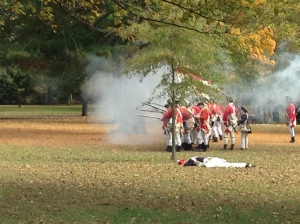 A casualty of war

and then my sister’s wedding on Sunday night. On Monday, my husband and I went out to lunch at our favorite Indian restaurant with my daughter and her wife before they flew back home.

My sister was my maid of honor when my husband and I married 36 years ago. I never thought I’d be at her wedding, standing at her side to witness her say her vow of love and commitment to her long-time partner in love and life. For over twenty years, she and her now wife have been together. They’ve built a life for themselves in their beautiful house with their two cats and a dog. My dad did not get to see this day, but he would have been thrilled and excited. My ninety-two-year-old mother was there, smiling—and dancing, too. I know this was an event she never thought she’d witness.

Some people would say I’ve been to two “gay weddings” in the last two months, but to me, they were simply weddings of two couples in love. One is a young couple just beginning their lives together, and one an established couple of many years, but they, too, are now newlyweds. My sister’s wedding was a joyous affair. As they gazed into each other’s eyes, my sister and my new sister-in-law said their vows. Family and friends surrounded them in a love cocoon from which they emerged transformed, married. We cried tears of joy, and laughed and cheered as they broke the glass.

Sunday morning had dawned blustery and cold. My daughter, her wife, and I walked to the battlefield. I’m writing an encyclopedia of daily life during the American Revolution—it was a weird and wonderful seeing people dressed in the clothing of the period I’ve been writing about. We took a tour of the Whitall House. I wondered what the strong Quaker woman who had lived there over two hundred years ago would have said about two women marrying. She was a woman who spoke her mind—I’ve no doubt that she would have had an opinion. Despite being morally opposed to war, she cared for wounded soldiers in her home. Perhaps she would have disapproved of a same sex marriage (a concept that she would not even have considered), but I like to think she’d recognize the love in the hearts of those committing to a life together. My daughter and her wife glow, and everyone around them feels their love. The beating of the drums that day on the battlefield marked the rhythm of soldiers and battles. The hearts that bled out that day—and stopped–had been hearts that loved and had been loved.

Sunday evening was filled with warmth. Hearts beat excitedly with anticipation and were filled with love. I got to see my sister married, something remarkable, simple, and profound. 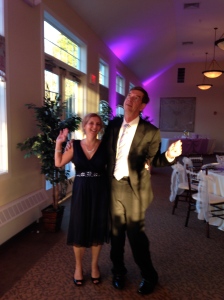 We’re excited and waiting for the wedding to begin!