“In all the universe nothing remains permanent and unchanged but the spirit.”

“There is only one really serious philosophical problem and that is suicide. Deciding whether or not life is worth living is to answer the fundamental question in philosophy. All other questions follow from that.”

–Albert Camus, The Myth of Sisyphus

“One must not put a loaded rifle on the stage If no one is thinking of firing it.”

“Give me books, French wine, fruit, fine weather and a little music played out of doors by somebody I do not know.” John Keats, Letter to his sister, Fanny Keats, 28 August 1819

On a beautiful day in early fall

we go to see a play,

a play about love and loss.

of life and death and sorrow and hope,

a play that discusses not only whether

life is worth living,

and can one enjoy life

without actually being happy,

or happy, but not very happy,

a play that breaks the fourth wall

and invites the audience to participate

(Perhaps with a little prompting–

because that seagull does need to make an appearance)

with characters who know they are fictional,

but are nevertheless real.

For all its existential angst

the play is funny

though of course, a gun on the stage must be used,

And balloons that appear

it’s a question of when,

I wonder how many people hear “Chekhov”

and think of the Star Trek character

and how sad is it that Anton Yelchin who played

Chekhov in the movies died in such a freak accident?

It seems more Twilight Zone than Star Trek, doesn’t it?

In a Star Trek world, there would be a way to bring him

back. And so this has me pondering a whole different set of philosophical questions about life and death. But not during the play, you understand,

(But really that whole killing a seagull thing. Isn’t that seriously psycho behavior?)

which we enjoyed, by the way, in case you couldn’t tell,

great acting, some funny songs, and a well-designed set. 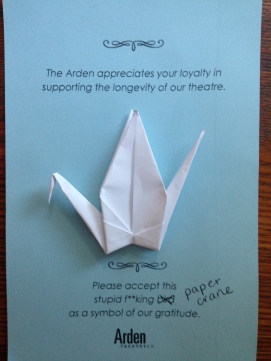 It is a beautiful day,

and we sit outside drinking coffee,

there is the man with three—

They have smiling doggy faces amidst tufts of hair

that attract a gaggle of women.

We look at the buildings around us

and the birds hunting for crumbs,

we walk back to our car

the coffee crowd morphing into the Saturday

(two women talk about where to get moonshine

is that a thing now?)

and the police officers on their horses,

one horse, unconcerned, gives herself a bath 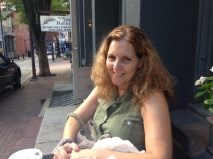 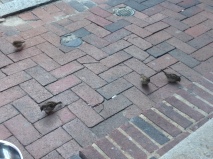 and producing more stories and art

when so much exists already?

The answer, of course, is that we have a need to create.

Since prehistory, humans have created

to go with the stories we create

to explain our existence.

to express and honor beauty.

We imitate and create

We are complex creatures,

We go to a wine festival the next day,

though perhaps its existence came about by accident,

and we eat cheese

because we learn by experiment—

Eat it, drink it, and see what happens.

And I think of ancient humans discovering that food

can be cooked, spices added,

the appreciation of complex flavors and aromas

and that food and wine

become even more pleasurable when shared with loved ones.

And so we do just that at this wine festival. 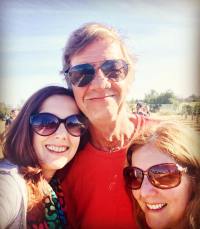 I think of the stupid fucking bird,

that stole my daughter’s sandwich right from her hand

at the beach this summer.

It is funny now, a story

in verse here that I feel the need to create.

though sometimes I may be stupid,

I may stumble a bit

(well, there was that wine)

life is worth living,

Thanks to Elusive Trope for the Camus quote. (And for the philosophical explanations.)

We saw Stupid F**king Bird by Aaron Posner at the Arden Theatre in Philadelphia.

We went to Old City Coffee

And the Heritage Wine Festival in Mullica Hill, NJ.