“If we both describe the same thing at the same time, will one of our descriptions be more true than the other?” 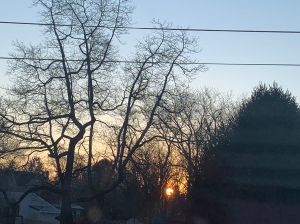 The sun rises each day

truth, whether we see it or not

a tangerine on fire—

does the description change the fact–

a rose by any other name, and all that?

The sun, a fiery ball in our sky,

the horizon, the end of all we can see

of a world that goes on and on

through space and time.

Now a whisper of spring hovers–

but is winter waning

or waiting, gathering strength to roar

with gaping mouth and jagged teeth

sending its icy breath to freeze the world,

my world, turning it white,

the sun then but a hazy memory? 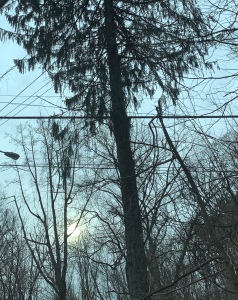 Hazy January sun through trees off of Lincoln Ave, Philadelphia.

The woman in the play foresees war,

war is a constant, is it not?

My mother is almost a century old,

How many wars have there been–and death.

(Some days she longs for her own death.)

She has good days and bad days,

My mom watching the “wing bowl” at her assisted living facility.

Her laugh can light up a room.

I will miss that when she’s gone.

her fading away, I won’t miss that.

Once she was a child, a teen,

still, her laugh can light up a room

the way the sun lights up the sky.

Do you see it?

How would you describe it?

A sunrise? A laugh?

The days have been dreary

there, a hawk cries from above,

there on the ground a hint of what may come 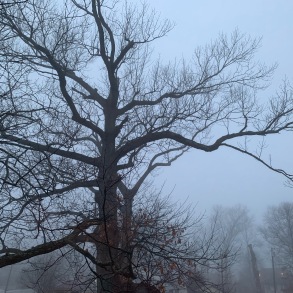 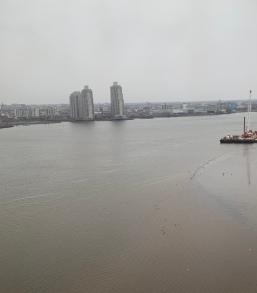 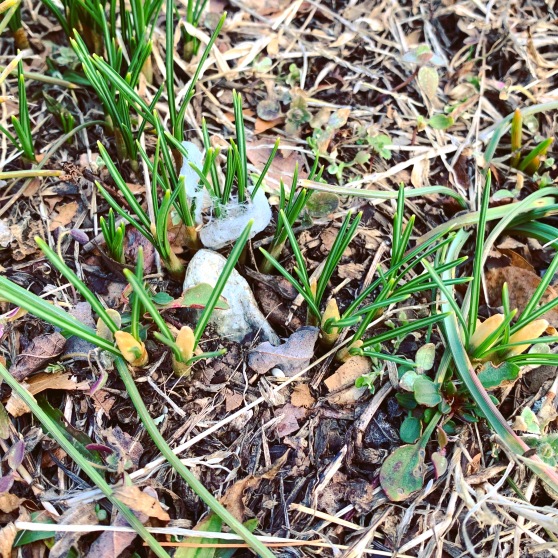 The man in the play extols the black Magic Marker,

it erases the past, a new truth can be told–

it is a crime to be alive when the state says you are dead,

perhaps eat this leech soup, and remember, the women say.

this is the world,

and I think we need heroes,

or perhaps the children will lead us now.

I listen to the moon’s hum, the stars’ songs

reflect on the river’s reflections

I bake and cook

trying to stay cozy in a tilting world 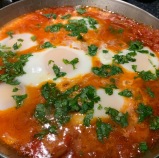 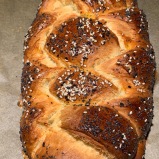 And if it tilts,

how will we describe the sun rising

cycles that are constant but changeable

even if we don’t notice the change till it’s too late.

Is it too late?

we watch movies and plays

because life goes on 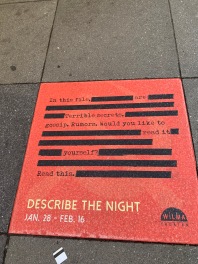 light bends and what of time?

Perhaps we may see ourselves

rising again with the sun. 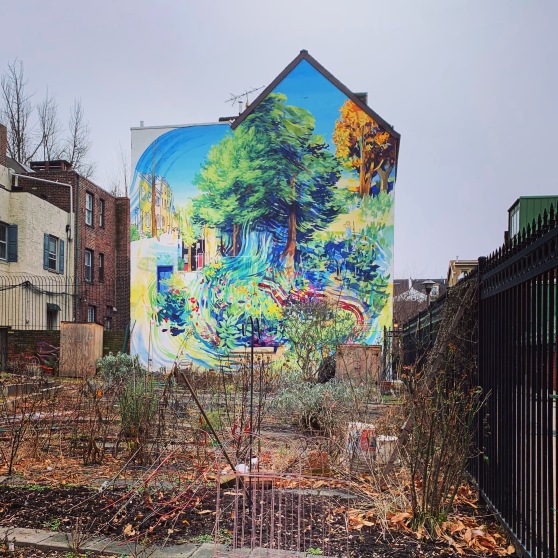 Garden of Delight by David Guinn, Mural Arts of Philadelphia

Merril’s Movie (and Theater) Club: We missed the movie Harriet when it was in the theaters, but it’s streaming now. The word hero is overused, but Harriet Tubman truly was one. The movie is sort of a standard bio-pic, good, but not great–but Cynthia Erivo is wonderful in the role. She seems to channel the spirit of Harriet Tubman. Also, for us, it was fun seeing local Philadelphia/New Jersey places and historical figures, such as William Still. We will be seeing a play about Harriet Tubman later this month.

We saw the play Describe the Night at the Wilma Theater in Philadelphia. Both of us totally enjoyed this play that combines myth and reality, historical figures in imaginary situations, and imaginary people in historical situations. One strand is about “Putin’s” rise, but the play goes back and forth in time. It gave us a lot to talk about afterwards. A real “Merril” play. And my husband was still able to see most of the Super Bowl when we got home. 🙂

And lest you think I only watch serious things–we binge-watched the second season of Sex Education on Netflix.

Sometimes we do not control what we watch.

Who controls the remote?