“Once upon a time, when women were birds, there was the simple understanding that to sing at dawn and to sing at dusk was to heal the world through joy. The birds still remember what we have forgotten, that the world is meant to be celebrated.”

(I liked this quotation so much, I took it from Robin at Breezes at Dawn. Check out her blog, which is full of insight, warmth, and stunning photos. )

“In the quantum multiverse, every choice, every decision you’ve ever made and never made exists in an unimaginably vast ensemble of parallel universes.”

the word spreads in the mouth, then ends with decision,

strolling more than marching—so many bodies, you know—

love emblazoned on signs, and in hearts,

marking and separating us,

dancing up into the sky,

trying to heal the world,

(hoping it’s not too late)

realizing that some do not understand that love is love

and that hate is not the answer.

And so, we responded after

the day of doom,

a day of gloom,

a day we thought would never come,

a day in which we’re all a bit numb,

he gives a speech not of hope,

(the edge of the slippery slope?)

no appeals to the better angels of our natures,

no asking what you can do for your country,

no yes we can,

He speaks in dog whistles

and many feel discarded

no longer a part of the land of the free,

And so, only fearing fear itself, we march,

we march for our children, our future, our world

my daughter and my new-found friend,

we leave New Jersey for Philadelphia,

the train is packed,

cheers as marchers get on at each stop–

there are stories to be swapped–

who began her career at age nineteen,

she taught in a one-room schoolhouse in southern Illinois.

with miles to go.

Exiting the Patco station at 16th and Locust

We walk to the rally.

Laugh overhearing the group in front of us,

“You know how I like to moon my mom?” a young woman says to her friends.

Marchers, as far as we can see,

(Marchers all over the world!)

who have come from other parts of Pennsylvania

(The wonders of modern technology.) 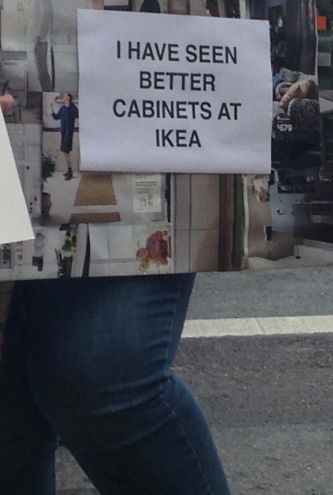 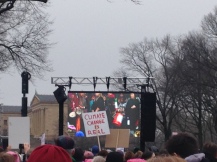 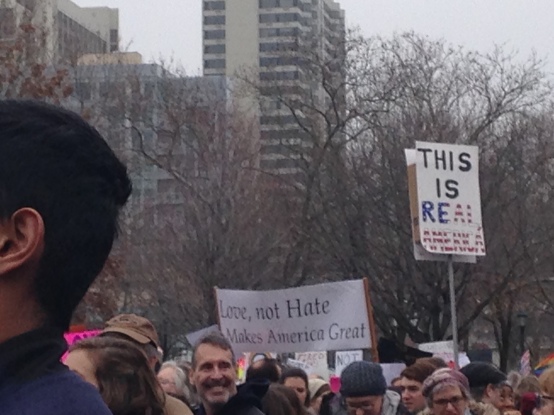 And we’re walking and talking,

And there is hope in that multitude.

Back in New Jersey,

We head to a winery—

It’s been a long day,

On Sunday, my husband and I see a play,

a couple may or may not meet,

may or may not greet

or waltz to a beat.

And we all wonder about choices made in life, don’t we?

I wonder about history–

is there a timeline for a failed American Revolution?

Another for Hitler’s not being defeated?

A timeline where what we know now is deleted,

or was never completed?

Is there another world where I did not move from Dallas?

Perhaps one where I lived in a palace?

One in which I did not meet my husband?

A world where I did not have my darling daughters, my joy?

(No, too sad to contemplate.)

What answers lie in the stars?

Are we ruled by Jupiter or Mars?

Is there a timeline where I could ever have supported a misogynistic demagogue?

Perhaps in another timeline we have our first female president,

a world where we did not need to rant and vent.

Perhaps in another, parallel universe we have not elected a petulant, dangerous man-child,

Perhaps there, the people understand what should be celebrated.

where we have not forgotten,

where songs and hope blossom,

Perhaps there, humans are human,

and love is love.

I highly recommend Constellations at the Wilma Theater in Philadelphia.

We did a special wine tasting at Sharrott Winery that included red wine hot cocoa. We plan to go back when it is warmer to sit outside and enjoy their wine.

And I will continue to be vigilant and to resist.