“I will honour Christmas in my heart, and try to keep it all the year. I will live in the Past, the Present, and the Future. The Spirits of all Three shall strive within me. I will not shut out the lessons that they teach!” 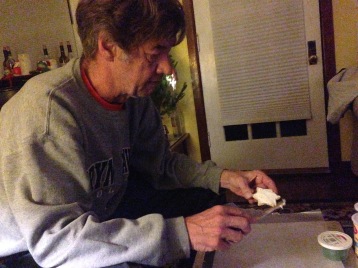 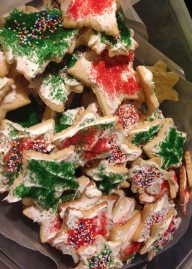 On Christmas, I see the past, present, and future appear. Perhaps not as actual ghosts, but as memories, experiences, and wishes. As we decorate Christmas cookies, I think of all the times I did this with our daughters. My husband declares this is the first time he has ever frosted the cookies. Perhaps it’s true. My sugar cookies have stars with five points and stars with six points. They’re all equally sweet and delicious. The Hanukkah candles and the Christmas lights both glow in the winter darkness, symbolizing miracles and bringing hope. This year, I give one daughter Hanukkah presents with a Hello Kitty! Christmas card on Christmas Eve day, when we gather with my niece and her family. In the background, Christmas songs written by Jewish men softly play. We sit around a table in a room decorated for Christmas and discuss ancestors in Belarus and Ukraine, people who never celebrated this holiday.

How did they get here, my niece asks? How did they have the means to leave? When she was a girl, my father’s mother hid in a barn during a pogrom. Somehow, they—some of them–found the means to leave, and to come to a country where they were not persecuted for their religious beliefs and culture. Their ghosts appear briefly and stand around us. Perhaps they would not approve of these goyische celebrations, but I hope they’d sense the love. Here and now we eat and laugh together, even as we miss those no longer with us. We will miss our daughters on Christmas, and I will miss being awakened by hearing them sing “Christmas Time is Here” early in morning. But now on Christmas Eve, my husband and I drink mulled wine and watch It’s a Wonderful Life, and I think yes, it is. 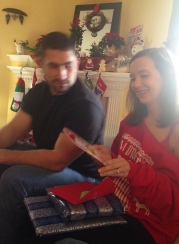 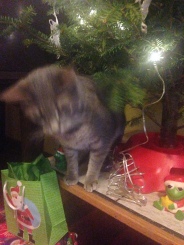 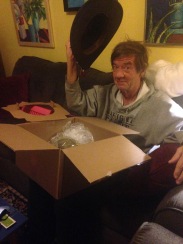 Wishing all of you a joyous holiday season filled with peace, hope, love, and laughter! 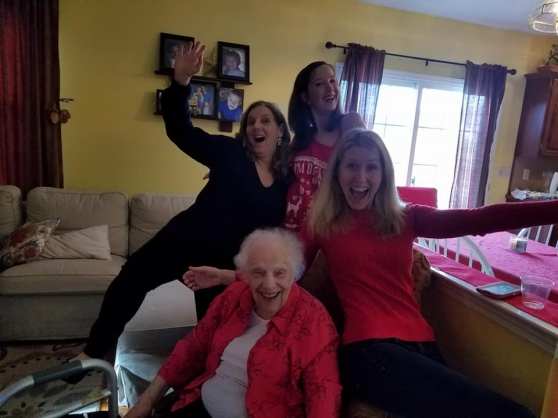 Those of you who follow my blog know that I enjoy going to the movies, and that I often mention movies I’ve seen.  In my WordPress 2015 Year in Blogging summary, I discovered that a February post, “Going to the Movies With the Smiths” was my most commented upon post this year. In the post, I discussed seeing Still Alice and some other “sad movies.” In one of those strange coincidences, just after I read my summary, I saw Stephen Liddell’s post about his top ten movies of the year, which reminded me of some movies I had seen and enjoyed earlier this year including The Imitation Game, The Theory of Everything, and Far From the Madding Crowd.

In the past couple months—the time of year when often the serious Oscar contenders arrive in theaters–my husband and I have seen some wonderful movies. For the most part, they were not movies with lots of action. The movies relied on well-written scripts, nuanced performances, and good editing. There were no superheroes, unless you put investigative reporters, astronauts, and those who challenge social mores in that category, which I suppose I do.

Of the recent movies I’ve seen, I would place Spotlight and Carol in a tie for best. They were totally different types of movies, but both were beautifully done. Spotlight tells the story of the Boston Globe’s Spotlight series that exposed the enormous problem of sexual abuse crimes by clergy within the Catholic church, along with its systemic cover up, which involved not only church hierarchy, but also government officials and organizations. Focusing first on Boston, the movie then reveals the global scope of the problem. The movie does not ignore the suffering and trauma of the survivors of the abuse, who the reporters methodically track down.  One of the movie’s taglines was “Break the story. Break the silence.”  Directing a great cast, Tom McCarthy achieved a movie that was tense and exciting, an amazing achievement for a “newspaper movie.” The audience in the movie theater applauded at the end. I felt like we all let out a collective breath, a feeling that though just a beginning, some justice had been done.

Carol is based on a novel by Patricia Highsmith. It is about two women who fall in love in 1950s New York.  Cate Blanchette and Rooney Mara give superb performances, as they convey so much with merely a glance. Kyle Chandler as Carol’s bewildered husband also does a fine job, as does Cory Michael Smith as the nerdy, creepy “notions” salesman. It is one of those movies that envelopes the viewer in its world. The score is fantastic, too.

Brooklyn and The Danish Girl were my next favorite movies. Both were also have outstanding cinematography and boast wonderful performances by the leads and supporting cast. Brooklyn is the story of an Irish immigrant (Saorise Ronan) to 1950s Brooklyn. It explores homesickness, love, and family—as well as what it meant to emigrate at that time. The Danish Girl, which I’ve written about in another post, is about artist Einar Wegener, who had one of the first sex-change operations in the 1930s. Director Tom Hooper elicits elegant and heartbreaking performances from Eddie Redmayne as Einar/Lili and an even more compelling performance from Alicia Vikander as Einar’s wife, Gerda, also an artist.

Other movies we’ve seen recently and enjoyed include The Martian and Bridge of Spies. I still want to see Trumbo, Room, and, yes, The Hunger Games. (You weren’t expecting that one, were you?) J Well, I’m also looking forward to the new Star Trek movie next summer. See, I’m not a total movie snob, as my sister refers to me. I’m also intrigued by Anomalisa, Charlie Kaufman’s new movie featuring puppets.

I’m a fan of old movies, too. On Christmas Eve, my husband and I watched, or perhaps I should say re-watched, It’s a Wonderful Life. It may be a bit schmaltzy, but the 1946 Frank Capra directed movie starring the perfect Jimmy Stewart is a true classic.

So what movies have you seen recently? Do you have a favorite genre?

Thank you to all who read my blog, and especially to those who take the time to comment. It has been a true joy getting to know you. Welcome to my new readers, too!

I don’t want to end this post without acknowledging my five top commenters in 2015:

Frank of A Frank Angle

Rowena of Beyond the Flow Who keeps me up to date on all things Australian.

Do check out all of their wonderful blogs!

Happy New Year! Wishing all of you—health, happiness, good friends, the opportunity to see wonderful movies, to read fantastic books, and to enjoy the goodness of life.  And of course, let’s all wish for world peace.