Collection of pins, Library of Congress

As I walk to the polling place

I think of times not long gone by

Of those not welcomed in this space

A robin sings from a pine tree,

Above him blue is the summer sky

Yet elsewhere votes do not get cast

Here flowers bloom, no one will die

To have this right, and hold it fast

Bread and roses, not much to ask,

Yet, jail and death, and people cry

Freedom and rights, take up the task

Standing on shoulders of giants,

I walk, I vote, I watch birds fly

Free and high, no fear of tyrants 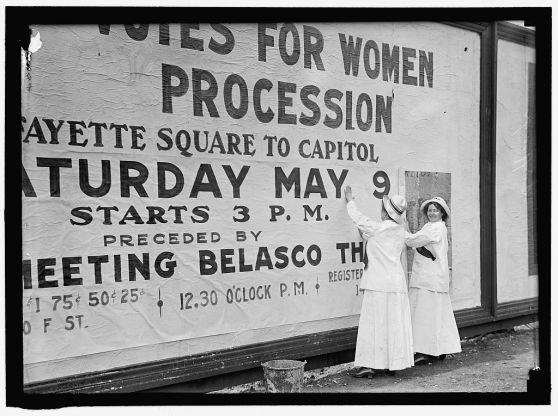 For a brief time under New Jersey’s Constitution of 1776, anyone, male or female, black or white, could vote, as long as they could meet monetary or property requirements (this was standard for the time). This right was taken away in 1807. (You can read more here. )

The Fifteenth Amendment, ratified in 1870, prohibited the denial of voting rights to citizen’s based on “race, color, or previous condition of servitude,” thus giving formerly enslaved black men the right to vote.

On June 4, 1919, Congress passed the Nineteenth-Amendment to the U.S. Constitution stating “The right of citizens of the United States to vote shall not be denied or abridged by the United States on account of sex.” The amendment was ratified on August 18, 1920.

Poll taxes and bogus literacy tests (and intimidation) were used to effectively disenfranchise many black voters in the south until the passage of additional laws, including the Voting Rights Act of 1965 were passed. More recently, some states have passed voter ID laws, which often prevent citizens from voting.

Here’s Judy Collins singing “Bread and Roses”  . The words originated in a 1911 poem by James Oppenheim, “Hearts starve as well as bodies, give us bread by give us roses.” The women striking in the textile mill of Lawrence, MA, used the slogan, and it became popular again in the 1960s.