“That was how evil spoke. It made its own corrupt sense; it swore that the good were evil, and that evil had come to save mankind. It brought up ancient fears and scattered them on the street like pearls. To fight what was wicked, magic and faith were needed. This is what one must turn to when there was no other option.”

–Alice Hoffman, The World That We Knew

“Grey Rock centers on the idea that human curiosity is stronger that gravity. I believe that art, which has no boundaries, can influence dialogue.”

in the space between–

sunrise to my front

and moonset to my back,

in between past and future

though the earth continues

its revolutions round the sun,

turning on its axis.

We gaze at the moon

a part of us

Taken from the Commodore Barry Bridge

blown away by the wind.

we all have the right to dream

the Palestinian man in the play

dreams of building a rocket,

sending it to the moon.

He loves his daughter,

he loved his wife,

and love is magic

the people in the novel find,

though evil is real,

it is all around them–

the Angel of Death is kept busy

but love has its own power.

we talk as we walk

as we think about our future.

Pennsylvania Hospital in a window reflection.

are we blind or too afraid

in the trill of birdsong

the tumbling crash of waves

the humming of the moon

and the music of the stars

floating down to us.

and echoes in our hearts,

a thing of magic and beauty—

and here around us.

I fear we’re in scary times, but we can’t lose hope or the ability to dream.

It’s the start of birthday month here with more to come. 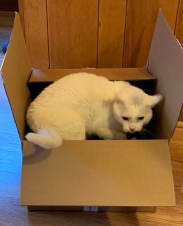 Everyone gets a present.

My husband made this for his mom!

We saw the play Grey Rock by Amir Nizar Zuabi and a Palestinian cast performing in English. It was commissioned and produced by the Remote Theater Project. It was also part of Philadelphia Theater Week. We both really enjoyed the play, which was funny, tender, and moving.

I read Alice Hoffman’s The World That We Knew. It is magical realism mixed with Jewish folklore and history. It is set during the Holocaust, and it involves the bond of mothers and daughters. There is a female golem and birds. A heron also figures prominently in the story. As you might suspect, I absolutely loved it.

No movies this week, but we watched Season 1 of Counterpart on Prime. J.K. Simmons is wonderful, and he gets to play two characters, in this spy thriller that involves parallel worlds.