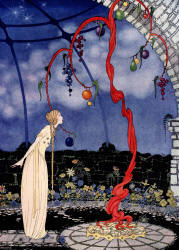 Dove was tired of rules telling her how to dress, how to behave, how to think. She tore off the black cloak that covered her from head to ankle and threw it to the ground. She took the pins from her hair and let the breeze toss about her long, golden brown curls. She removed her shoes to feel the grass, slightly damp, on her bare feet. Then she walked to the red tree with its fruit of many colors, and defying the laws of her people, she picked a purple one and took a bite. She didn’t die; she didn’t feel any ill effects at all. In fact, the forbidden fruit was delicious. She continued to munch on it as she strolled home, ignoring the gasps and murmured prayers of the people she encountered.

Within an hour, the council summoned her. Though her parents begged for leniency, Dove was unrepentant, and the council banished her from the village. She hugged her parents and left her homeland.

She walked for days and nights until her food was gone. Wrapping herself in the hated cloak, she cried herself to sleep. In the morning, she woke to see the bright, rosy-pink dawn, and she was filled with hope that something good would happen that day.

She brushed the dirt from her clothing and continued her journey. Before long, she came to a town. As she approached it, she heard the most glorious sound.  She stopped a woman and asked her what the sound was.

The woman took Dove to the town hall. There Dove saw that the sound—music—came from a group of men, women, and children dressed in colorful garments.

That is how a rainbow must sound, thought Dove.

In time, Dove discovered that she had a voice, too. All she had to do, was open her mouth and let it out.

This was the first of many discoveries Dove made. She soon realized that the people of her homeland were not protected, they were trapped there by their ignorance and fear. She took a new name, Violette, for the purple fruit she plucked from the red tree, the fruit that set her on her journey of discovery and knowledge. Eventually, she fell in love and gave birth to a daughter. They named her Aurora as a reminder that dawn always comes, even after the darkest night.

Although I went way above the word count, this fairy tale is for Jane Dougherty’s Microfiction Challenge.  The prompt was the painting above. I have no idea what old French fairy tale it is actually illustrating.