The dance of rain

on window pane, all misty grey

the dance of rain.

the lightning flash, a sky ballet,

to boom and crash, twirling away

the dance of rain

This poem is in response to Jane Dougherty’s poetry challenge. This week’s challenge was to write a Rondelet using the prompt “summer storm” and the photo above. 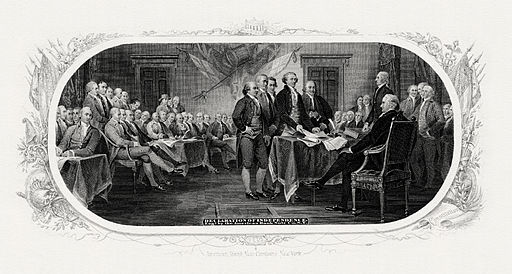 By Frederick Girsch at the American Bank Note Company, for the Bureau of Engraving and Printing (Restoration by Godot13) [Public domain or CC BY-SA 3.0 ( via Wikimedia Commons)

to celebrate this freedom day,

for the declaration, brigades

the costs, the lives lost, yet I say

with illuminations and shows

our hopes through this inspired prose,

this declaration we propose

This is a double rondelet. I used some of the words from a letter John Adams wrote to his wife, Abigail, about the events of July 2, 1776. Full text here.  On this day, the Second Continental Congress approved the motion for independence, which Richard Henry Lee of Virginia had brought forth in a resolution on June 7. The Continental Congress approved the actual Declaration of Independence document, written mostly by Thomas Jefferson, on July 4th. Most of the delegates signed the document on August 2. It is believed that Thomas McKean of Delaware signed at some point in 1777.

And if you’re interested, you can read more about the daily life during this period of American History in my World of the American Revolution: A Daily Life Encyclopedia.

We ached for home,

starting our journey, looking back

we ached for home

in our red boat, we had to tack

we ached for home

We set sail upon the ocean

We challenged men, we broke the rules,

Made our plans, set them in motion

Women! We caused a commotion

These two poems are in response to Jane Dougherty’s Poetry Challenge #37. For this challenge, we were to write a rondelet using the image above, Odilon Redon’s La Voile jaune (The Yellow Sail) and the word “journey.” This is a new form for me. Both of these poems are inspired by the picture, but only the first one uses the word “journey.”  A rondelet is a 7-line poem (septet) with two rhymes and a repeated refrain. The refrain is 4 syllables; the other lines are 8 syllables. AbAabbA