murmuring beneath the moon 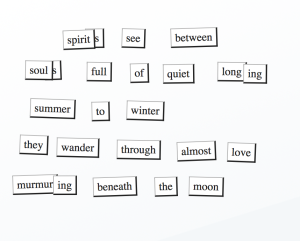 The photo is from the summer, but the moon was humming this morning.  🙂

I wake to news of carnage. I wonder, fraught at what is wrought by men and guns and crazed ideas. My spirit feels wounded, unable to summon the joy. Yet I know it is there, buried in my heart, waiting to soar. I know that above me, the stars still sing, and the moon hums her changing melody, calling the tides. Come play, she croons, come roll and prance.  Music of the universe, music of Earth. Listen–there the mockingbird, and there the robin, and there up at the top of the oak tree, the blue jay squawking. The gift of song, it’s all around us.

the sound of a summer breeze

laughs through a window 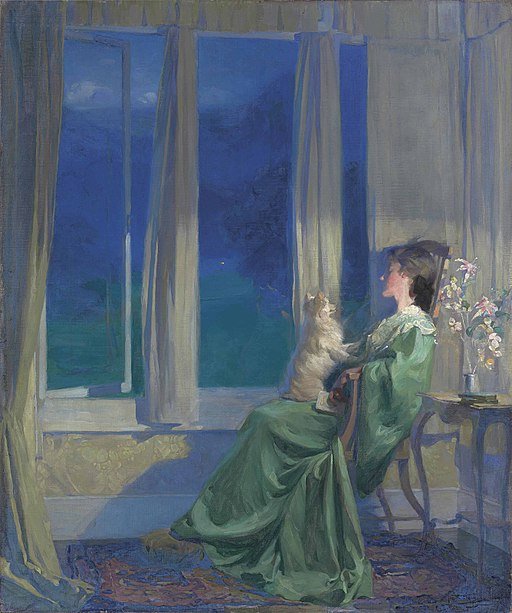 This Haibun is a for Colleen’s Poetry Challenge. The prompt words were spirit and joy. Since I didn’t participate last week, I also used that week’s words, gift and song.

Iona sailed her ship across the sun-dappled sea to save her beloved from the underworld. Iona had to rescue him tonight, for Halloween was the one night when humans could travel there. She traveled for hours, and as twilight descended, the Isle of the Dead appeared in front of her, shrouded in mist. Within that shroud she saw spectral figures, the stuff of nightmares, with misshapen bodies and eager, bloody mouths.

Iona ignored them and sailed into the cove. As she stepped upon the shore, a dragon appeared. Fire and smoke burst out, as it opened its massive jaws to roar.

With trembling legs, Iona approached the beast and sang in a voice that faltered at first, but then rang out, loud and pure:

Beast, do my bidding

As she finished her song, the air shimmered. The dragon became a dog, red as flames. It licked her hand, and followed at her heels, as they walked to the cave—its opening now revealed.

They walked down steep stairs carved into stone, farther and farther under the earth. Iona carried an oak wand given to her by a Wise Woman. It glowed and lighted her way. She looked neither left nor right at the spirits around her, but traveled down, down, down. As she reached the bottom, she saw Dermid. He stood rooted, with no expression on his face.

She remembered the Wise Woman’s words, “Your courage and determination will get you to the Isle, but only true love and faith will save Dermid.”

She clasped her arms around his waist and held tightly as he turned into a huge snake, but she held on, and he turned into a lion, but still she held him, and finally he turned back into a man. Her man. With tears streamed from her eyes, she helped him journey up the stairs.

They climbed up and up for hours, it seemed, racing to get back to the surface before dawn. They reached the surface just before the sun, and as they climbed into Iona’s boat, they saw it rise pink and orange above the sea. The Isle disappeared.

Dermid said to her, “Thank you for saving me.”

Iona replied with a smile, “I thought our baby should have a father.” Then looked down, “and a dog.”

This is for Jane Dougherty’s microfiction challenge.  The prompt was the painting above.

I’ve stolen, quite shamelessly, from many myths and tales, and once again gone over the word count.