“The play’s the thing

Wherein I’ll catch the conscience of the king.”

Matzah is probably the most recognized symbol of Passover. Before commercialized matzah became available, members of Jewish communities sometimes baked it themselves—under close supervision, of course.

In Colonial America, congregations often had to produce their own matzah, although not all colonies grew wheat or had adequate supplies, so the grain sometimes had to be imported. Matzah, and other Jewish/kosher food items, were also imported. It was helpful that many prominent Jewish families were merchants with contacts throughout the transatlantic mercantile community. Here is the board used for preparing matzah at the eighteenth-century Touro Synagogue, Newport, Rhode Island.

In the nineteenth-century, machines became available to make matzah. There was some controversy, however, over baking commercially baked matzah and matzah machines and whether the matzah produced by them was kosher for Passover. Something I had never before thought about–most of the hand-produced matzah was round, but the matzah produced by Manischewitz  and other mass-producers was square, and of course, each piece was the same.  In 1942, however, the company produced V-shaped matzah as part of the WWII war effort, “V for Victory.”

Aron Steits founded a matzah bakery in 1915. This matzah factory, the last major one that is still family-owned in the US, is set to close.

“Though matzo is a simple mixture of wheat flour and water, producing it is an intricate affair. During Passover, observant Jews are forbidden to eat grain products that have been allowed to leaven, or ferment and rise, so the flour and water must be placed in an oven within 18 minutes after they are mixed. The entire process is supervised by what are known as mashgichim — Orthodox people trained in the fine points of kosher law. Streit’s employs seven of them.”

In some places kosher for Passover matzah is still handmade. Joan Nathan describes one such bakery in Brooklyn, where the men and women work quickly to produce the matzah within eighteen minutes. Under Jewish law, it must be mixed, rolled, pricked, and baked in that time—from when water first touches the flour–so that there is no danger it will sprout. If the work is not finished within eighteen minutes, the matzah is not considered kosher for Passover. The flour is carefully produced and ground under supervision, as well, and even the water used in the baking is examined. Nathan mentions one of the workers, Reuven Sirota, who baked matzah in secret in Uzbekistan because celebrating Passover was forbidden there. (Joan Nathan, Joan Nathan’s Jewish Holiday Cookbook (New York: Knopf, 2004), 339.)

On Saturday night, we celebrated Passover at my house with a dinner and a modified Seder—and commercially made Streit’s matzah. There were seventeen people around our table–tables, actually—the dining room table, the kitchen table, and a card table all placed in one long line with three separate tablecloths. Our group included family and friends, and my older daughter and her wife joined us by SKYPE.

A few years ago, I created a sort of family Haggadah, cobbled together from various sources, and including family jokes, such as a line about celebrating “the spirit of roast beef.” Seder means order, and there are fourteen steps to the Seder. We never get through the whole thing. In true scholarly fashion, however, the Haggadah I put together has appendices with further reading and lists the sources and documentation I used—you know, just in case anyone has additional questions. I always think we might debate and discuss, but we never do. This year, we totally forgot to open the door for Elijah. Ooops. Once we get to the eating part, the Seder pretty much disappears. This year, my niece’s children were not even interested in hiding and finding the Affikomen, the middle piece of matzah broken and wrapped in a napkin during the Seder. There will have to be a new twist on that tradition next year.

Our Seder always includes a play. My husband and I recently saw a production of Hamlet in Philadelphia. During the play, there is a play within the play. Hamlet wants a group of traveling players to perform a show with a storyline that is similar to how he believes his uncle, now the king of Denmark, murdered his father. He thinks that when his uncle sees the play, his reaction to it will reveal his guilt. In a soliloquy in which he describes the plan, Hamlet says, “the play’s the thing.”  During our Passover Seder, the play is also “the thing.” We’re not out to catch murderers though. The play began as a fun way to tell—or reveal–the Passover story. Telling the story is one of the steps of the Seder.  Over the years, it has become THE highlight of our Seder, our family’s thing. Our daughters have written it for the past few years. They have given notice that they will write it for two more years, and then they will hand-off the play-writing torch.

Well, it will be difficult to top this year’s play. It was an interactive experience called “Whose Passover Is It Anyway?” based on Drew Carey’s comedy show. There were different scenes, in which we were assigned parts and told to improvise using props on the table or by acting out in the emotions called out by one of our daughters. In other scenes there were scripted lines, but the scenes had to be acted out in a particular way—using only three words, as an action movie, etc. I think everyone thoroughly enjoyed it, and everyone had a chance to participate.

I suppose the only thing that might have topped the play was the food—because everyone was VERY hungry by the time we were finally ready to eat. 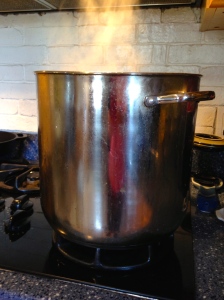 Chicken Soup simmering on the stove.

Did I also mention that we went through many bottles of wine? We had red and white, including a tasty, Australian shiraz, and wines from Spain and the United States, too.  I know I didn’t drink the four glasses required by the Seder, but others may have. I’m not naming names. We had all the standard food—chicken soup (and vegetarian)–both with knaidlach, or matzah balls, gefilte fish, hard-boiled eggs, brisket, turkey breast, roasted sweet potatoes, and some delicious roasted carrots brought by guests. By the time we got to dessert, my sister literally groaned while tasting the flourless chocolate cake (my brilliant idea was to top it with a chocolate drizzle and sea salt)—“Oh my god! This is so good.” The cake also conveniently doubled as a birthday cake for my brother, whose birthday is today.

After dessert, our guests, bellies full, slowly crawled out the door. The cats wandered back downstairs. Time to cleanup.

Hope all of you had a pleasant weekend, whether you celebrated a holiday or not!