Am I really on my way to Paris? My mind drifts and tumbles like the clouds outside the plane’s window.
I think back—when I met Paul (as he was called then) that first time in the woods. I hadn’t slept much the night before. I couldn’t stop thinking of the bombs and the flames—London burning; my family gone. I wanted the cool peace of the ancient forest that surrounded our training area. I heard his steps and turned quickly. My instructors would have been proud of my instinctual fighting stance.
“I saw you leave,” he said, “I was worried about you.”
I said, “Do you know Yeats? ‘I went out to the hazel wood because a fire was in my head.’”
He smiled, and as I looked into his grey-blue eyes, I knew I was smitten–and I knew it was dangerous.

Back to my Prosery spies, but no Hopper this time. This is for dVerse, where
Kim asks us to use this line from W.B. Yeats’ “Song of Wandering Aengus.”
‘I went out to the hazel wood,
Because a fire was in my head’.
I love this poem, and it is such a well-known line. I first incorporated it directly into the prose, but it just didn’t seem right. So, I hope this is not cheating, but this seemed much better to me. Also, in my head, I always hear this line sung because I knew Judy Collins’ song version before I knew the poem. Kim shares a Christy Moore’s version.

“There midnight’s all a glimmer, and noon a purple glow,

And evening full of the linnet’s wings.”

At the glimmering lake the birds still sing,

though you’ve been gone for many a year,

Once I longed to wear your ring–

before things changed, I sought you here,

at the glimmering lake the birds still sing,

You promised sun, moon, and everything,

before bad times came and settled near,

then I watched as linnets took wing.

I realize now, I was just a fling–

that thought is now as clear

as the glimmering lake where birds still sing

where at my side, our baby’d cling

without a father. She brought me cheer–

as I watched the linnets take wing

I dreamt I was a queen and you my king,

before you sailed far from my pier

at the glimmering lake, the birds still sing,

For the next month, we’re writing villanelles at dVerse, under Sarah’s capable direction. I’ve only written a couple of these, so I’m tiptoeing into this challenge by revising one I wrote for Sarah’s very first dVerse prompt! See how things come full circle in poetry land? Here’s the link to the original version. It was written during last year’s NaPoWriMo, and this year’s is coming up.

I met a man who told me tales of wand’ring

where by a stream he dreamed, and his pond’ring

the ships he sailed, and battles fought as he could.

Then how his dream seemed more real than all of this—

of his darling’s kiss, how missed, and what he should

have done. Now old, I think of his dreamed kiss,

his plans altered and rued. I instead stayed,

with you, I thank that man, his lesson taught,

Another sonnet for dVerse, this time in Terza Rima, with thoughts, too, of enjambment, per Jilly’s post. I’m still reading the sonnets, and I’m so impressed with the philosophical questioning. I seem only to be able to write these narrative type sonnets. This started out as a poem based on a Yeats challenge, Jane Dougherty did a while ago. If you want to read that version, it’s here. So indirectly, this is inspired by Yeats. Feel free to comment.

“There midnight’s all a glimmer, and noon a purple glow,

And evening full of the linnet’s wings.”

Around the glimmering lake, where birds still sing,

though you’ve been gone for many a year,

I stayed and watched as linnets take wing.

Once I longed to wear your ring–

before things changed, I sought you here,

around the glimmering lake, where birds still sing,

You promised the sun, the moon, and everything.

before the bad times came and settled near,

I realize now, I was just a fling

though I thought you loved and held me dear

around the glimmering lake, the birds still sing

Here at my side, our baby did cling

without a father. She brought me untold joy and cheer–

I dreamt I was a queen and you my king,

before you sailed far from my pier

around the glimmering lake, where birds still sing,

Somewhat related to today’s NaPoWriMo prompt, I’ve stolen Jane Dougherty’s idea, so it only seemed right to base my villanelle on her beloved Yeats. In the spirit of the prompt, this one probably needs a lot of revision! 🙂

I’m also linking this to dVerse, where Sarah is hosting for the first time. She’s asked us to write an ekphrastic poem (which I’m not sure that this is)  based on the work of artist Faye Collins.

This is for the final day of Jane’s wonderful A Month with Yeats Poetry Challenge. It has been glorious. Thank you, Jane! I wanted to end the month on a hopeful note–a bit different from my last couple.

I’m also linking this to the dVerse Open Link Night.

“And I shall have some peace there, for peace comes dropping slow,” —W.B. Yeats

In my dream, I soar with the gulls

adding my laughter to their own,

as I fly higher and higher away from home,

riding the waves of the infinite sea

just there, a speck, a spot within the shimmer

as the stars sing their songs and the moon hums along.

Then dropping slow, I wake at peace upon my bed,

(bits of stardust still glint softly on my head),

at home with you, now earthbound me,

and I rejoice to hear a sound, the robin’s voice

and rises strong at dawn from the maple tree.

This is for Jane’s Month with Yeats Poetry Challenge.

“Why, what could she have done, being what she is?

Was there another Troy for her to burn?”—W.B. Yeats

Through the Ages, She Is Blamed

They laid the conflicts at her door–

her hair unbound, or what she wore—

they blamed their deeds on her physique

oh, they have brawn, but they are weak,

when they confine her to a guarded room,

do they fear her fruitful womb,

and do they grope her milk-filled breasts

and say it is their god’s request?

and they blame her body for tempting them,

as they rip her dress from neck to hem,

they will not let her flee–nor be–

those named and nameless who do not see

it is they, not she, who commit the atrocities.

“I am woman hear me roar.”  I hope I can end the challenge tomorrow on a more pleasant note, but considering all that’s going on in the world and the fact that I’m working my way through my copyedited Encyclopedia of Rape and Sexual Violence. . .well, we will see. 🙂

For Day 28 of Jane’s A Month with Yeats Poetry Challenge.  Today’s quotation:

And had rooted the sun and moon and stars out of the sky”—W.B. Yeats

On storm-tossed seas with blackened skies

he traveled lost, and so afraid

longing for the siren’s call

to forget he was now ostracized.

Once at the top, a renegade

who chose to obliterate with his cabal,

and wakened monsters from the shade,

all vaporized, and so, the ashes fall

on ruined lands, on Earth’s demise

“Once more the storm is howling, and half hid

only on the here and now,

her dreams without words

travel from the stars

“I would that we were, my beloved, white birds on the foam of the sea!”–W.B. Yeats

or stood amidst the sea foam, 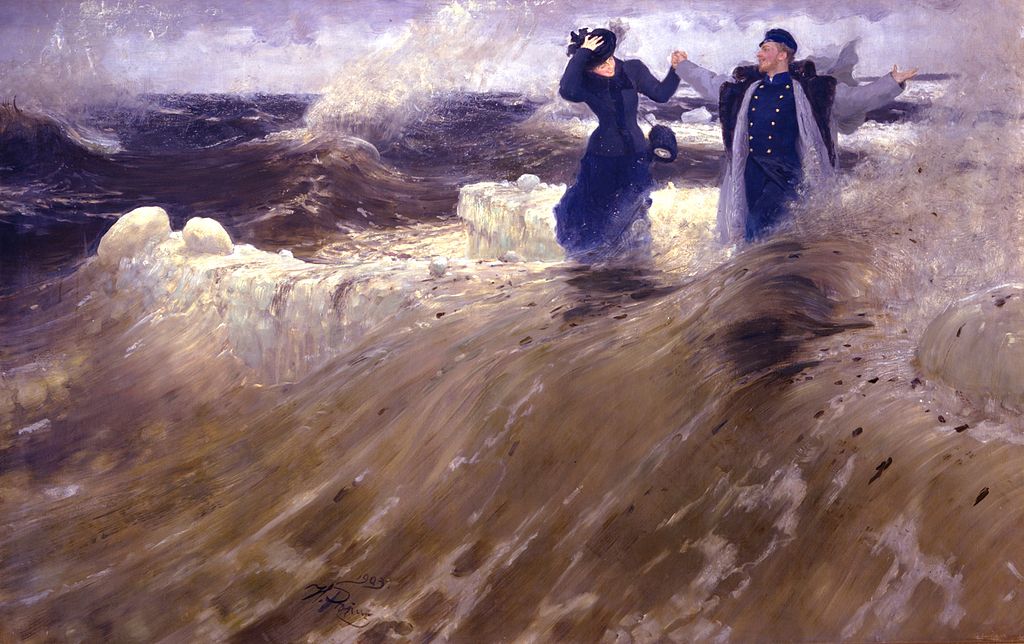 This is for Jane’s  A Month with Yeats, Day Twenty-Five.

Today’s quotation is from the “Song of Wandering Aengus.”  Judy Collins sings a lovely version of this poem.

“And when white moths were on the wing,

And moth-like stars were flickering out,

I dropped the berry in a stream

I met a man who told me tales

of wand’ring long on lonesome trails

through silvered groves of hazel wood

and seeing trout from where he stood

on the banks of a laughing stream

and how he fell into a dream.

He was old when he told me this,

of how he dreamt he had been kissed,

of how he’d never settled down

from fighting battles for the crown

of how he missed his darling’s lips

as he was gone upon his ships,

and how she chose another man

changing the life he thought he planned.

Now I am old, remember this,

the stranger’s tale of his lost kiss,

but when I dream, I dream of you

of wishes cast on waters blue

spindrift in the prismed light

flying high in the starlit night

I think of the man, his lesson taught–